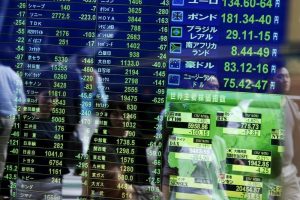 The dollar held firm on Monday after data showed surprise strength in the U.S. jobs market, but the currency was restrained from moving higher by worries about an escalation in the U.S.-China trade war.

U.S. nonfarm payrolls increased by 266,000 jobs last month, the biggest gain in 10 months, while the unemployment rate ticked back down to 3.5%, its lowest level in nearly half a century.

Those figures suggested the Trump administration’s 17-month trade war with China, which has plunged manufacturing into recession, has not yet spilled over to the broader U.S. economy.

Still, investors think that could change if trade tensions escalate further, especially if Trump goes ahead with planned tariffs on some $156 billion worth of products from China from Dec. 15.

The market has been largely working on the assumption that those tariffs, which cover several consumer products such as cellphones and toys, will be dropped or at least postponed, given that Washington and Beijing agreed in October to work on a trade deal.

Top White House economic adviser Larry Kudlow confirmed on Friday that the Dec. 15 deadline to impose the new tariffs remains in place, but added that President Donald Trump likes where trade talks with China are going.

China’s exports shrank for the fourth consecutive month in November, underscoring persistent pressures on manufacturers from the Sino-U.S. trade war.

The currency has been bolstered by expectations that Prime Minister Boris Johnson’s Conservative Party will win an outright majority in the upcoming election on Thursday, thereby ending a hung parliament and political paralysis on Brexit.

The Conservative Party extended its lead over the Labour Party to 14 percentage points, up from 9 percentage points a week ago, an opinion poll by Survation for ITV’s Good Morning Britain showed on Monday.